The Only Clamp Meter Guide You’ll Need In 2021

With the electrical circuits getting complicated with time, it’s getting more challenging for the electricians and technicians to measure the in-line current. Due to this, utilizing the old-school method of cutting the wires and then inserting the measuring device’s leads into the circuit isn’t a viable option anymore. To bypass this, technology has again knocked the doors with another revolutionary electrical device and that’s a clamp meter. In the above representation of a basic clamp meter, you can discern a clamp-like structure fixed to a multimeter and that’s why it’s called a clamp meter. If you want to know more about this device, this article is for you. In the below sections, you’ll understand:

What is a clamp meter?

The best alternative for your regular multimeter for measuring in-line electrical current, a clamp meter is a device that can measure the AC or DC flowing through a circuit without actually interrupting the circuit. That’s, unlike a multimeter, a clamp meter will produce the current readings by simply clamping the device’s ports around the wire to gauge the current flowing through that wire. It’s designed in such a way to measure current up to 100A and its direction as well. Similar to the multimeter, if you’ve clamped the leads in the opposite direction, a minus (-) sign will accompany the current reading. However, in terms of accuracy, the conventional multimeter is still a notch above the clamp meter. 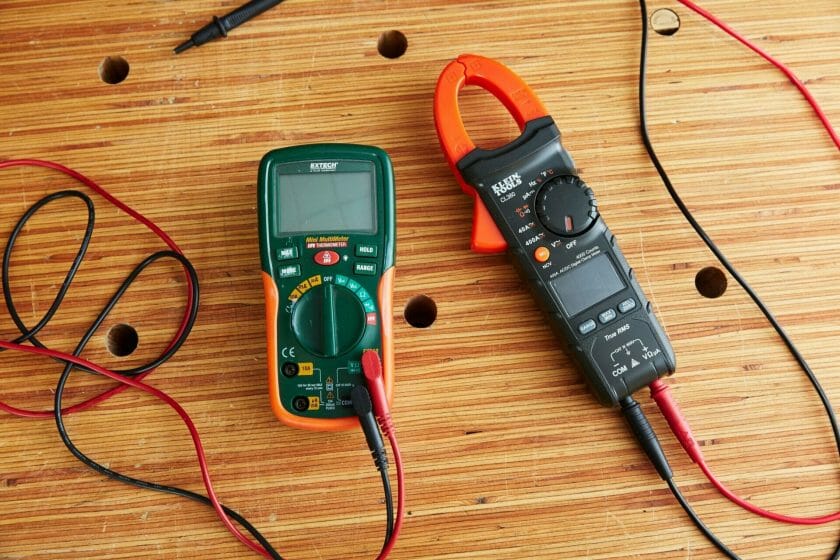 Construction of a clamp meter

In the above figure, the section of the meter marked 1 represents the clamps or jaws which go around the wires, and the section marked 2 provides support to these leads. Then, 3 is a sort of push-type hinge or clamp opening/closing trigger. 4 is the screen that displays the current flowing in the units you can vary from the knob 5. Based on the designs of clamp meters, you can have other elements too.

How to use a clamp meter?

To use a clamp meter, press the push-type hinge to open the clamps. Then, place the wires whose in-line current is to be measured between the clamps and release the push-type hinge to close the clamps. It’s necessary to close the clamps as then only the core of the meter will be closed. Following this, the primary current will start inducing electromagnetic magnetic fields (EMF) in the secondary windings of the wire and the current flowing through them will get displayed over the screen.

There are three types of clamp meters available and these are:

Key applications of a clamp meter

The key applications of a clamp meter are:

● It can measure high-level current, as high as 100A. Contrastingly, a typical digital multimeter can’t measure a current of more than 10A as doing so will damage the device.
● A clamp meter is also used for performing complex circuit tests, troubleshooting the circuits, etc.
● Besides current, you can also measure resistance, capacitance, temperature, frequency, and much more depending upon the model.

So, now that you know both these devices are primarily used for measuring current, you might wonder which forms a better choice over the other and why. Right? The following comparison table will answer this most decently.

A clamp meter is today’s alternative to the conventional multimeter due to its above benefits. Not only is it safer and convenient to use, but it’s also equally economical and easy to maintain. However, there is still a window open for improvements in its accuracy. In a nutshell, for basic electrical measurements, you’d go with a clamp meter.

We provides high quality of Imported and Indian Industrial Instruments. We have availability of stocks, Quick deliveries to fulfil the Order. “Uniglobal Business Products” are rapidly growing family of businesses with highly motivated team who strive to exceed our customers’ expectations every day. Our customers are our prime focus. We are always here to serve you and look forward to helping you succeed.

The Only Guide On Lux Meters You’d Need In 2021

Refractometer: Everything you’d know about this revolutionary device

What Is The Difference between N95 and N99 Masks?